The eighth meeting since 1994 of puzzle cutters, collectors, enthusiasts, dealers was held Thursday evening and Friday, April 12-13, 2007 at the Holiday Inn Golden Gate in San Francisco, CA. Nearly 60 people attended the all-day session on Friday. The meeting was held immediately preceding the Annual AGPC Convention, so many attendees at the puzzle meeting stayed over for the Convention, some for the first time and some as new AGPC members.

On Thursday night attendees arriving early met at the Hotel lounge to be greeted by the organizers and meet the other attendees, followed by a buffet dinner at the Hotel. After dinner, Bob Armstrong reviewed his remarks about Ebay from the 2000 puzzle meeting at Katonah, NY and introduced the audience to the latest fad on Ebay: mega-bidding through Esnipe. The audience were intrigued by Bobs analysis of how a bidder, with deep pockets and nerves of steel, can virtually guarantee being the winning bidder on the better quality puzzles listed on Ebay. 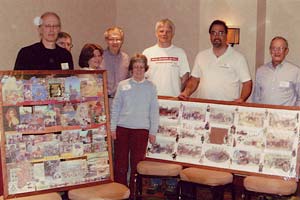 The highlight of the meeting was the presentations to Anne Williams and Bob Armstrong of two enormous puzzles brilliantly designed by Melinda Shebell for which approximately 15 puzzle makers from around the country had cut individual sections. Annes puzzle (3 x 3) featured a collage of images of leading puzzles divided into four eras depicting the history of American puzzles to which Anne has contributed so much: pre-1900, 1900 to 1930, 1930 to 1960, 1960 to today. Bobs puzzle (2 x 5) featured images of all 16 of the Ludovici Dickens coaching scene puzzles which Bob has collected for many years, cut employing nearly all the special cutting techniques which Bob analyzed in his series of articles for the AGPC Quarterly published in 2002. Both Anne and Bob, who had cut sections for each others puzzle, were totally surprised when each was presented with their own puzzle and astounded that Melinda could engineer two such spectacular puzzles at the same time. A separate section of this website will be devoted to more pictures and a fuller description of the two puzzles.