The ninth meeting (a/k/a Puzzle Parleys) since 1994 of jigsaw puzzle cutters, collectors, enthusiasts and dealers was held November 7-9, 2008 at the Sturbridge Host Hotel in Sturbridge, MA.  Co-chaired by Bob Armstrong and Melinda Shebell, a record 87 people attended the all-day session on Saturday, November 8.  Puzzle Parleys are designed for puzzle makers from the professional to the beginner to share their techniques, sources, tips, and for puzzle makers, collectors, enthusiasts and dealers to learn about the history and cutting of puzzles and to buy and sell old and new puzzles. 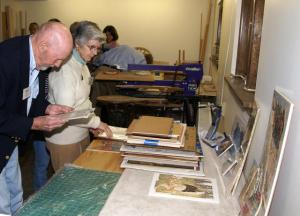 The three-day meeting started at Melinda Shebells house in Stow, MA Friday afternoon with an Open House.  Melinda displayed many of her old and new puzzles and gave cutting demonstrations in her workshop for interested parties.

Friday night featured a buffet dinner at the Hotel, followed by Bob Armstrongs remarks describing the history of the puzzle parleys beginning in 1994 with a suggestion made to Bob by Pagey Elliott, Why dont we hold a meeting of puzzle cutters?  And we could call it a puzzle parley!  What started as a meeting in September 1994 of over 20 people, mostly puzzle cutters from New England, at the home of Deborah Greeley, Pagey Elliotts sister, has expanded to include puzzle cutters, collectors, enthusiasts and dealers from all over the country, Canada and England, with meeting locations in Concord, Lexington, Sturbridge and Worcester, MA; New York City (2) and Katonah, NY, and San Francisco, CA.  Following Bobs remarks, the group gathered in a separate room to work on assembling approximately 15 puzzles well into the night.  This was an opportunity for current cutters to test their latest creations against experienced puzzlers.  Generally, the puzzlers won but not easily! 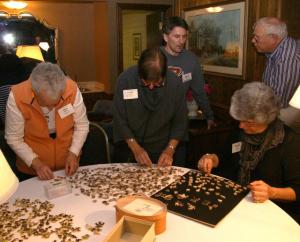 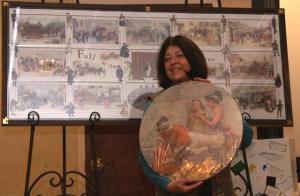 Bobs puzzle was a rare round Pastime;

Annes puzzle was actually cut by Anne herself. 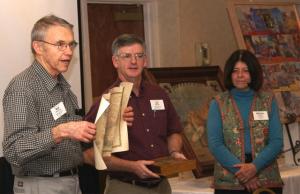 Bob then presented to Joe Seymour who had designed and built the frame for Bobs special puzzle, the Map of California, Mexico and Texas and the United States puzzle published ca.1849 by Kelly & Levine, Boston, MA, one of the earliest map puzzles made in the States.  View the entire presentation. 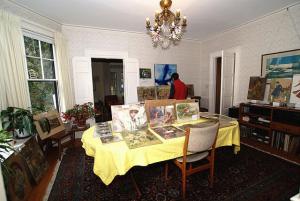 Their house was filled with old (and a few new) puzzles from all eras and different makers, and Bob showed anyone interested his workshop and discussed how he restores his old puzzles.

Also handed out at the meeting and available free upon request from Bob at: : 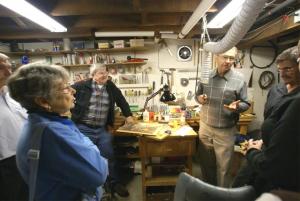 In summary, the Parleys have expanded over the years to include cutters, collectors, restorers, enthusiasts and dealers.  Sturbridge was the biggest and best to date with 87 attendees.  However, Melinda and Bob need more help as the meetings grow larger.  Volunteers, anyone?  The next Parley probably wont be scheduled before early 2010.