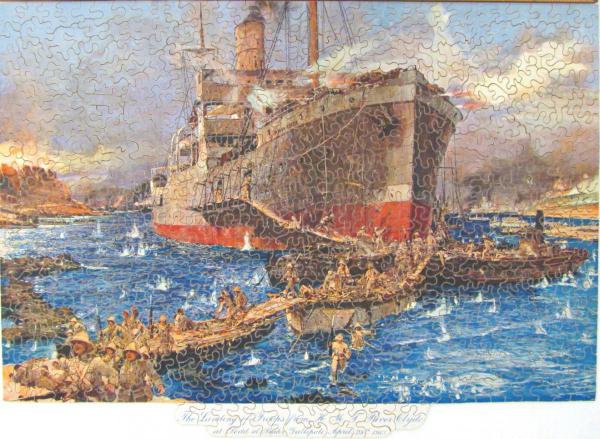 An amazing scene and puzzle, even to the irregular bottom resulting from the cutter's preservation of the puzzle title. Unknown maker, plywood, interlocking, 1 figure piece and some color line cutting.  Artist is Charles Dixon, art date: 1915.

The Gallipoli Campaign, also known as the Dardanelles Campaign, the Battle of Gallipoli or the Battle of Çanakkale (Turkish: Çanakkale Savaşı), was a campaign of World War I that took place on the Gallipoli peninsula (Gelibolu in modern Turkey) in the Ottoman Empire between 25 April 1915 and 9 January 1916. The peninsula forms the northern bank of the Dardanelles, a strait that provided a sea route to the Russian Empire, one of the Allied powers during the war. Intending to secure it, Russia's allies Britain and France launched a naval attack followed by an amphibious landing on the peninsula, with the aim of capturing the Ottoman capital of Constantinople (modern Istanbul).[6] The naval attack was repelled and after eight months' fighting, with many casualties on both sides, the land campaign was abandoned and the invasion force was withdrawn to Egypt.

The campaign was one of the greatest Ottoman victories during the war. In Turkey, it is regarded as a defining moment in the nation's history: a final surge in the defense of the motherland as the Ottoman Empire crumbled. The struggle formed the basis for the Turkish War of Independence and the declaration of the Republic of Turkey eight years later under Mustafa Kemal (Kemal Atatürk) who first rose to prominence as a commander at Gallipoli. The campaign is often considered as marking the birth of national consciousness in Australia and New Zealand and the date of the landing, 25 April, is known as "Anzac Day" which is the most significant commemoration of military casualties and veterans in those two countries, surpassing Remembrance Day (Armistice Day).  Source: Wikipedia

Topics:
WW I
Sale Status:
Not for Sale
Collection:
World War I Puzzles