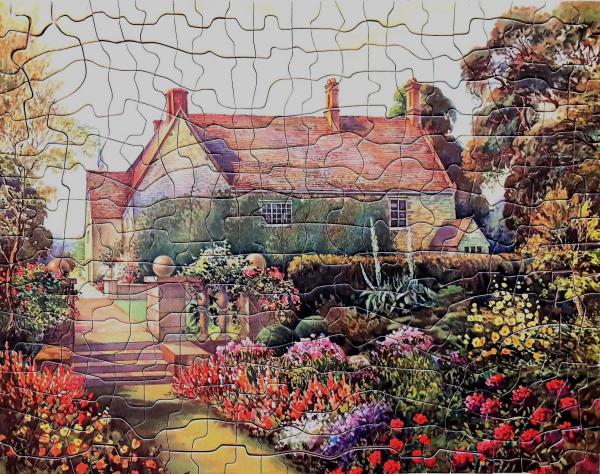 In 1539 or 1540 the Crown sold three manors, including Sulgrave, to Lawrence Washington, a wool merchant who in 1532 had been Mayor of Northampton.  Washington's descendants retained the manor until 1659, when one of them sold it.  In 1656 a descendant, John Washington of Purleigh, Essex, emigrated to the Colony of Virginia.  He is notable for being the great-grandfather of George Washington, who from 1775 commanded the Continental Army in the American Revolutionary War and in 1789 was elected first President of the United States.

Lawrence Washington had Sulgrave Manor house built in about 1540–60.  It is at the northeast end of the village, built of local limestone, with a southwest front, a kitchen and buttery, a great hall, and above it a great chamber and two smaller private chambers. Finds of what seem to be Tudor foundation stones up to 50 ft (15 m) west of the current house suggest that the original building was substantially larger than the surviving house.[citation needed] The great hall has a stone floor, and its Tudor fireplace contains a salt cupboard carved with Lawrence Washington's initials.[

The house has a projecting two-story southwest porch, over the doorway of which are set in plaster the royal arms of England and initials "ER" for Elizabeth Regina commemorating Elizabeth I, who acceded to the English throne in 1558  The doorway spandrels are decorated with the Washington family arms: two bars and three mullets or spur-rowels.  Wikipedia.