The seventh meeting since 1994 of puzzle cutters, collectors, enthusiasts, dealers was held on September 11, 2004 at the Colonial Inn in Concord, MA. Nearly 70 people, easily the largest attendance ever, attended the all day session which featured:

Easily, the highlight of the meeting was the presentation to Pagey Elliott of a huge puzzle brilliantly designed by Melinda Shebell for which 17 puzzle makers around the country had cut individual sections of a scene featuring Pagey's favorite breed of dog, the Golden Retriever. Pagey was totally surprised by the presentation but had the presence of mind at age 91 to recite an appropriate poem as part of her thank you remarks! 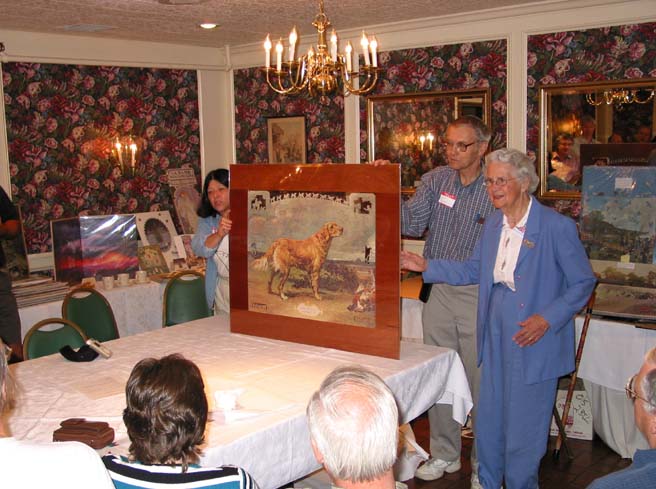 The Saturday meeting was preceded by two Friday morning restoration workshops at Bob & Hildegard Armstrong's house in Worcester, MA with nearly 25 people attending some of whom also visited and viewed 19th century puzzles at the nearby American Antiquarian Society, an open house at Melinda & John Shebell's house in Stow, MA Friday afternoon with 50 people attending, and drinks and dinner at the Colonial Inn Friday night for early arrivals. After Saturday's all-day meeting, nearly 60 people stayed for drinks and banquet at the Inn that night which culminated in a light-hearted presentation of "Bob Armstrong's 10 most controversial opinions re jigsaw puzzles". Sunday morning was marked by an Open House at Bob & Hildegard's house with 40 attendees stopping by, some of whom Bob treated to a "mini-restoration workshop". All through the three days, at Bob and Melinda's houses and Saturday's session, magnificent jigsaw puzzles, both old and new, were displayed everywhere. Truly a feast for the attendees who went home with new additions to their collections, more knowledge about puzzles and new friends in the puzzle world!