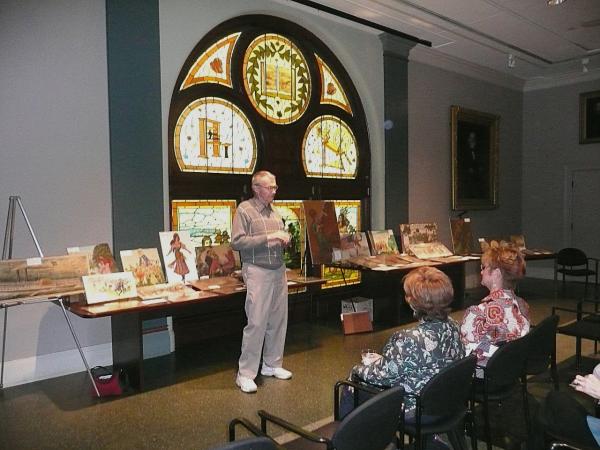 The Worcester Historical Museum, 30 Elm Street, Worcester, MA held an exhibit titled, YOURS, MINE, OURS for which the Museum invited members of the Worcester community who have interesting stories and collectibles, to submit the story and examples of their special items.

I was asked to submit the story and puzzles of two individuals, still alive today, who cut jigsaw puzzles back in the 1930s/40s.  Three puzzles and notebook of Douglas Butler who as a 12 year old boy in 1932 cut and rented out puzzles to his neighbors, and one puzzle of Barrett Morgan who cut puzzles for his family and friends in the 1940s were on display.  These puzzles are part of a much larger collection of puzzles made in the greater Worcester area which have subsequently been donated to the Museum.

Presentation at Worcester Historical Museum May 7, 2009

A. History of puzzles with examples

1. 1763: generally considered date first known jigsaw puzzle cut, in London, England, by John  Spilsbury, mapmaker.  Made from map of Europe as learning tool for children.  Next 100 years, puzzles were cut for children from maps, tables of kings of England and France, books of Bible, nursery stories, alphabet, etc.

1. Like most cities and towns in America, Worcester had numerous small makers of hand cut jigsaw puzzles, but unlike Springfield, MA which had Milton Bradley Co., no large makers.  Their puzzles are quite traditional for both the 1909 and 1930s eras.  Perhaps the most significant maker was Charles Russell, 28 Coolidge Street, Auburn, MA who cut puzzles from the 1930s to the 1970s.  It was in the 1970s when we met Mr. Russell and commissioned him to cut over 40 puzzles for our family enjoyment.

2. We know of two Worcester residents alive today who cut puzzles back in the 1930/40 era:

a. Douglas Butler cut puzzles as a 12 year-old boy in 1932 and rented/sold them to his neighbors in Westwood Hills.

b. Barrett Morgan cut puzzles as a boy in the early 1940s and gave them to family and friends.

3. Doug Butler is here today to share his experiences.  Very few puzzle makers from that era are still alive today, especially from the early 1930s when interest in jigsaw puzzles was at its peak.