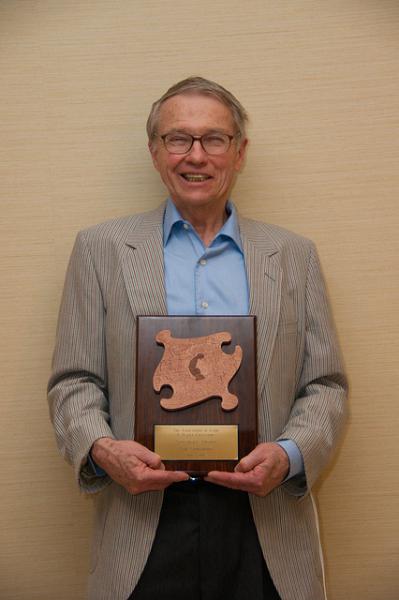 The Spilsbury Award is named after John Spilsbury, a London mapmaker of the 1760s.  He is the first documented commercial manufacturer of jigsaw puzzles whose puzzles still survive.  His dissected maps taught geography to the children of English aristocrats of the eighteenth century.

"It is my great pleasure this evening to introduce Bob Armstrong. Our paths first crossed twenty-two years ago this month, when Fine Woodworking Magazine published my article on how to cut wooden jigsaw puzzles.  A week later, I received a 2-page letter from Bob.  He gushed about my article, told me of his puzzling background, and invited me to the imminent christening of his recently established puzzle cutting workshop.

I was unable to attend, but his second letter, a couple of weeks later, asked about jigsaw puzzle organizations, saying:  If there is no such national org­anization, then I believe you should form one.

Now, people are always thinking up things for me to do.  But in this case I was off the hook.  I told him about this club, and he joined right away.  He was elected Secretary in 1996, and has served as a stalwart of the Board ever since.

Bob will tell you about his puzzling life in  detail this evening.  I dont want to steal his thunder, so I will focus on just four highlights and their significance. 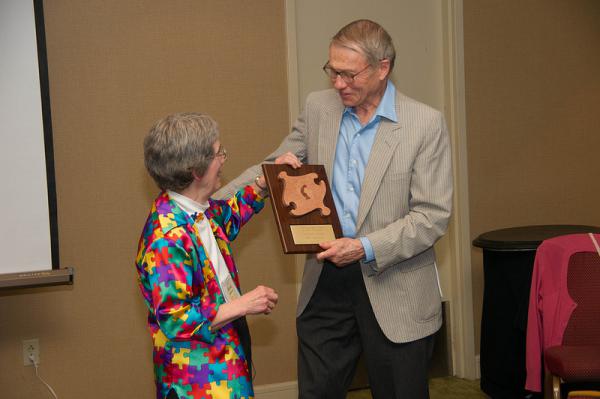 Photo by Rick Tucker First of all, Bob is a collector par excellence.  When we first met in person in July 1991,  Bob asked where to find old wood puzzles.  Naturally, I mentioned Brimfield, which is only a few miles from his home in Worcester.  He dismissed that idea, saying he did not want to spend time searching at flea markets.

Yet, a few months later, he was trekking through the muddy fields at Brimfield, or, as he calls it, BFM.   (Bob loves using abbre­via­tions.)

By the end of the year, Bob told me he was buying a dozen old wood puzzles per month.  That was pretty impressive in the dark ages before email and eBay.  His pace of acquisition has only accelerated since then.

Of course, I am a bit jealous of some of Bobs acquisitions,   and the fact that he gets so many of them at rock bottom prices.  But he has been very generous in sharing photos and details of his puzzles with me.  He has added greatly to my knowledge of American puzzles and their makers.

Second,  Bob is a top puzzle restorer.  He developed his own techniques for puzzle repairs, and often will spend hours on a single puzzle to make it look like new.  He has made almost 4,000 replacement pieces, plus many more tiny knobs.  Bob also regularly instructs collectors in how to restore their own puzzles.

You can see the value of his work in his annual fall auction. Dozens of bidders compete for his cast-off puzzles, in a feeding frenzy that rivals Brimfield at the opening bell.  His restorations, together with a highly unusual bidding system, mean that prices for Bobs puzzles are often twice what you might see on eBay. 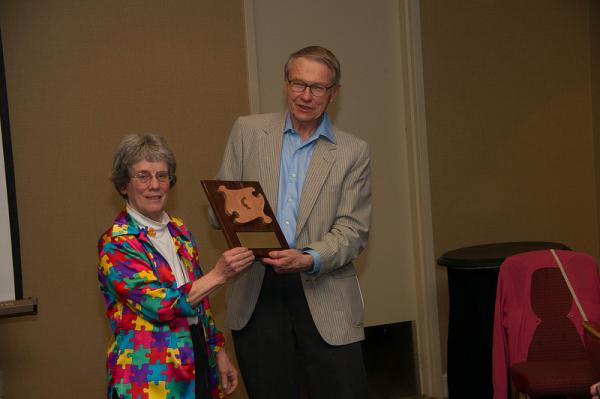 Photo by Rick Tucker Third, Bob has a lifelong interest in history which has carried over to jigsaws. He has written extensively about puzzles, their characteristics and their history.  Some of his articles for AGPC newsletters have included:

Lastly, Bob generously shares his expertise.   He has documented his puzzle collection meticulously, as he told us all last night, and published much of that information.  In this respect he has set a standard that no one else has met.  His oldpuzzles.com web site is a virtual museum, a resource for the whole world.

Bob answers more than 500 emails a year from people who want to know more about his puzzles and theirs.  He shares his puzzles in person also, by giving talks to civic groups and clubs.  He has mounted several jigsaw puzzle exhibits in Worcester.

Perhaps most importantly, he has been a prime force behind the eleven Puzzle Parleys held over the past  two decades.  He and Pagey Elliott planned the first one in 1994, as a forum for puzzle cutters to share their techniques.  Since then, the Parleys have grown from a one-day event for cutters, to a full weekend of activities for both cutters and collectors.

The Parleys give Bob an opportunity to do several things he loves most: 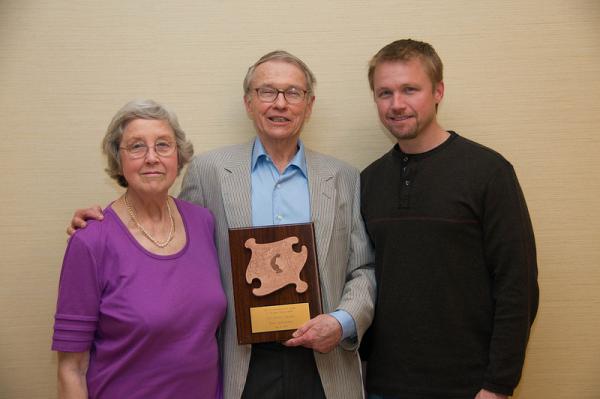 Finally, for the newcomers who have not met Bob before, let me fill you in on some of his quirks.  Now, we all have quirks, and AGPC members seem to have more than the general public.

Bob often refers to himself in the third person.  Take it from Bob Arms

trong he will declare forcefully.  He is in good company -  I think of him as the Bob Dole of the AGPC.

Like me, Bob can sometimes be a bit too intense.  Once, at my house, he was so focused on a puzzle that he walked through a doorway, completely oblivious to the fact that the screen door was shut.  Fortunately, the door popped right off its track and there were no injuries.

Bob has been known to grumble about how little he can do in the puzzle field.  He vents his frustrations about balky computers, memory lapses, aches and pains, doctor visits, other responsi­bilities, etc., etc.

To listen to him, you would sometimes think he was on his last legs  unlike the rest of us.

But,   dont let him fool you.   Bob manages to accomplish more than most people a generation younger.  And I havent even tried to enumerate his non-puzzle accomplishments!  Indeed, if we all could accomplish half of what Bob does, the world would be a better place.

Bob, it is my great pleasure to recognize your achievements in the jigsaw puzzle world with two items.

First, knowing that Hildegard and your three sons share your fascination for puzzles, I would like to give you this Expert Jigsaw Puzzle, for you and your family to enjoy.  If you cannot finish it this evening, you can hand it off to Conrad. 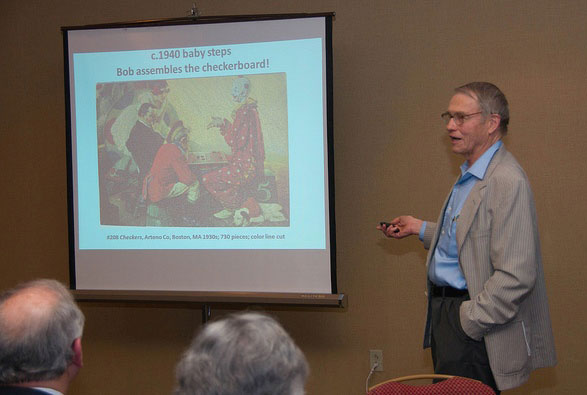 Photo by Rick Tucker Second, on behalf of all the members, I present you with this years Spilsbury Award, in recognition of your significant accomplishments in the field of jigsaw puzzles."

© 2013 Anne Williams. All Rights Reserved.  This material was first published on the AGPC website at: http://agpc.org/2013/05/bob-armstrong-2013-agpc-spilsbury-award-recipient/

After the presentation,  Bob gave a Power Point presentation titled, "Serendipity, Zippitty-Doo-Dah and a Lot of Help, or How in the world did a lawyer end up with the Spilsbury Award!"  View Bob's presentation.