Earliest Use of Special Techniques for Making Adult Jigsaw Puzzles 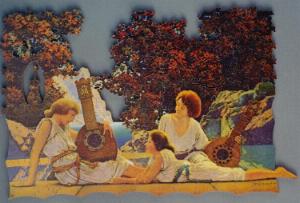 In my article titled Jigsaw Puzzle Cutting Styles: A New Method of Classification I identified (but did not discuss) eleven other special techniques employed in jigsaw puzzles made for adults [1]. Since then I have become intrigued with the many special techniques used in making puzzles and their history over the past 240 years. In this article, I will identify 38 special techniques and in my best judgment, when they were first used and the actual maker(s) who employed them. By special techniques I mean practices used by the puzzle maker in cutting a jigsaw puzzle and intended by the maker to:
-deceive the assembler
-make a puzzle more interesting, unusual, personal or challenging, or
-enhance the enjoyment of assembly or the impact of the scene.
While the effect of the technique upon the assembler is important, I am particularly stressing the intent of the maker, the fact that he/she has intentionally used a technique to achieve a desired effect.

In the interest of brevity, I am omitting: puzzles emphasizing marketing themes (i.e. advertising, double picture, mystery, riddle, game, extra pieces); childrens puzzles; block, metamorphic, marquetry,[2] mosaic and bevel puzzles. Since my discussion is based mostly upon American puzzles and involves considerable subjectivity, the reader may well disagree with my selections and conclusions and have information on puzzles unknown to me. I invite you to send me your thoughts on techniques which you think should be included and the puzzles and makers/brands which you believe predate the earliest use I have identified, or even if made in the same era, should be added to my short list of maker/brand[3].

Identification of earliest use and maker/brand is based primarily upon the files of Anne Williams and the Armstrong family, which, together, contain information on over 10,000 jigsaw puzzles. Where there is commonality among techniques, I have grouped and discussed them together. In many of the examples pictured on this page, the appropriate feature has been magnified so that the feature can be seen here. For all examples, clicking on the picture will lead to a page with a much larger picture of whole puzzle. The examples in this article are of: puzzles in the private collections of Williams and Armstrong, puzzles pictured in Williams book[4], and puzzle pictured in books written by others[5]. Still, a copy of Williams book nearby for quick reference would be helpful as you read the article. In addition, Conrad Armstrong (my son) has cut a 145 piece puzzle designed to illustrate 21 of the special techniques. Finally, for handy reference, I have developed a chart summarizing the 38 special techniques, their earliest use and by whom, and listing where they are displayed.

For collectors, finding and acquiring examples, especially early examples, of the 38 techniques listed should prove to be a stimulating challenge and new focus for your collecting activities. I am confident there are earlier and/or better examples of several listed in my discussion and I would appreciate hearing from you as you find them. For cutters, expanding your skills and repertoire to include some of the techniques discussed should prove an interesting challenge. I believe income and sales will increase accordingly. For sellers, pointing out the special techniques employed in the puzzles you list for sale (especially on ebay.com) should attract more buyers and higher prices. It is not by accident that the leading innovator of special techniques on my chart is Stave puzzles with eight, followed by Par Company with five. The puzzles of these makers are generally considered the best cut and most desirable puzzles on the market today commanding the highest prices. And for Stave Puzzles to have developed at least eight special techniques more than 200 years after the first puzzles were cut and following the accomplishments of Par and others, is truly amazing. It demonstrates that not everything has been invented in the jigsaw puzzle world and we can look forward to new techniques and interesting puzzles in the future.

Special acknowledgment must be given to Anne Williams for her continuing support, information and suggestions, and especially for her time in reviewing her own collection and data base for earliest uses and supplying me with copies of many of the examples displayed. Thanks also go to Conrad Armstrong who identified several of the techniques listed and then cut a special puzzle demonstrating 21 of them. Finally, none of this would have been possible without the indulgence of my wife, Hildegard, who allows me to take over several rooms of our large home in Worcester, MA for collection, restoration, study and display of puzzles.

Bekkering, Betsy and Geert. Piece by Piece: A History of the Jig-Saw Puzzle in the Netherlands. Amsterdam: Van Soeren & Co. 1988.

[2] Marquetry puzzles depend upon the color grains of different types of wood to paint the picture and can resemble the traditional jigsaw puzzle, as with puzzles of Steve Malavolta, Albuquerque, NM. This is a different area involving special woods and exceptionally fine craftsmanship, material for another article.

[8] The roots of figure pieces actually originated with childrens die cut puzzles of the 19th century. In the late 1860s, Milton Bradley, Springfield, MA used identically shaped pieces (circles and hexagons) so that the assembler would learn the parts of a ship or locomotive. And other makers would cut around a figure in the picture such as a horse or cow, thereby creating a figure piece with artwork appropriate to the figure.

[10] Raphael Tuck & Sons, London, England was cutting mouths into the faces of animal figure pieces in some of its puzzles using a single dead end cut as early as the 1920s.

[11] Parker Brothers, Salem, MA was cutting circles within circles in its Pastime puzzles in the 1910s. See http://www.oldpuzzles.com/Examples/detail.php?id=p297.

[13] Par Company used several different styles of lettering for the intended owners initials or name in a puzzle. A new style has recently been developed by Melinda Shebell, Stow, MA whereby she has been able to write a name in script using carefully placed kerfs between pieces and dead end cuts. Examples are displayed on her web site at: <www.jardinpuzzles.com>.

[15] So filled with delicate figures and intricate cutting, Falls puzzles are highly susceptible to damage.

[16] I did find an Isabel Ayer/PPE puzzle cut in the late 1930s which contains a single suspicious small hole amidst tree foliage and neatly deceived me, but this probably is a cutting error by Ms. Ayer near the end of her long and distinguished career and hardly compares with the extensive use by Stave Puzzles of dropping out multiple small areas in specially selected scenes with such deceptive effect.

[23] Exhibit 4b demonstrates dropouts-deception as well as multiple levels-different pictures.

[25] On the contrary, most English puzzles are considerably looser than their American counterparts. Since exposure to dampness tightens a puzzle over the years and England is renowned for its damp climate, the makers of English puzzles may have compensated for the inevitable swelling by cutting looser puzzles.

[26] Stave Puzzles creates a family tree puzzle with pictures of the buyers family incorporated into branches of the tree. Stave Catalog (2000-01, p. 36).

[27] Conrad Armstrong also used this approach about the same time in cutting his award winning Life Under the Sea puzzle http://www.newpuzzles.com/lifesea.htm